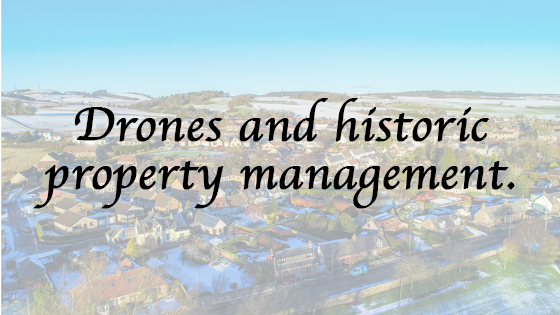 The following is an article from Historic England describing how they use drone technology to manage their buildings, archaeological sites and landscapes. The original can be found on their website.

If you are visiting England and are looking for inspiration for places to visit there is a fantastic resource here that is full of ideas.

Drones provide a useful low-level aerial platform for recording historic buildings, monuments, archaeological sites and landscapes. They can carry a wide variety of sensors including cameras, multi/hyperspectral imaging units, and even laser scanners. Drones can provide dramatic illustrative photographs of sites, but can also be used to create metrically accurate records for survey and conservation work. However, care needs to be taken to ensure drones are used in a way that is safe to both people and the historic fabric being recorded.

Although drone is the term most commonly used by the media and recognised by the public, other acronyms are these days used when referring to such low-level aerial platforms including:

Two types of craft are typically used for heritage-related applications:

UK use is typically restricted to a combined weight of less than 20kg for both drone and camera or other sensor. All aircraft, irrespective of their size, that are used within UK airspace for aerial work and for commercial gain (a valuable consideration) must comply with CAA regulations and permissions as outlined in CAP 722.

Heritage use of drones

Historic England has used drone acquired imagery since 2008 and has built up long experience of using such platforms alongside other means of capturing low-level aerial imagery such as masts, kites, balloons, helicopters and planes. There is a growing use of these aircraft across the heritage sector .The imagery and data they capture can be used across multiple applications including monitoring, presentation, interpretative display, multimedia journalism, surveying, mapping and recording.

The images used on this page are copyright Historic England unless specified otherwise. For further details of any photographs or other images and for copies of these, or the plans and reports related to our work please contact the Historic England Archive.