This article from IFSEC Global reports on the use of drones in security applications.

The global market for commercial applications was projected to be worth $127.3bn (£88bn) by 2020 – a staggering 6,000% jump in three years – by a PwC report published in May 2016. And security is set to account for $10bn (£7.8bn) worth of the market, behind only infrastructure, agriculture and transport.

Demand for drones in security applications 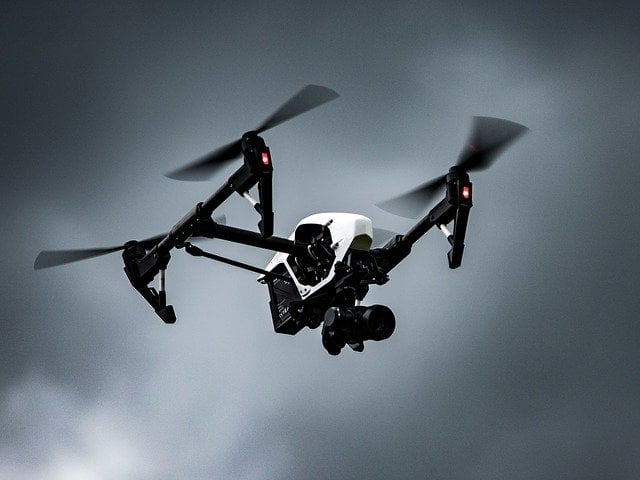 Drones are already more widely used in the security industry than many might have realised if our survey is any barometer. Sixteen percent of respondents – mostly comprising security professionals, heads of security and other senior executives – say they already deploy the technology. Three in five (60%) either already use drones or can foresee themselves doing so eventually, so it doesn’t seem hyperbolic to describe the growth trajectory for this market as heading sharply upwards.

Drones as a service

Replicating a model gaining ground in access control and long dominant in intruder alarms, the provision of drones as a service is likely to suit businesses that only need security drones periodically, want the flexibility to scale their operation up or down rapidly, or simply want to test the concept without making a big investment in hardware and training.

Unlike more established security technologies like CCTV, access control and intruder alarms, drone use does not benefit from the accumulation over several decades of guidance, operational methodologies and technical standards. They represent if not unchartered territory, then certainly lightly explored terrain.

Few organisations can draw on a wellspring of expertise within their organisation or readily find candidates with eclectic skillsets that happen to include expertise in this niche discipline. Within this context, this observation made by Adam Lisberg, DJI spokesman for North America, to Reuters in 2016, seem perceptive. “Four years ago, it was enough to take something out of a box, you push a button and it flies. The smart money is now in drone services.”

The British Security Industry Association (BSIA) estimates that there are between 4-5.9 million network cameras in the UK – about one camera for every 11 people. With so much of our urban environment already under surveillance, might hard-nosed security professionals write surveillance drones off as an expensive gimmick?

Perhaps yes, and understandably so, in certain contexts – most obviously in the surveillance of building interiors. And yet, as well as being unmanned and equipped with on-board cameras, the other obvious facts about security drones are that they are mobile and airborne. This means they can do things that are impossible for regular fixed surveillance cameras – like birds-eye views over large areas or dispatching rapidly to areas of interest. Consider this in combination with the enormous size of the global surveillance market – worth more than $30bn (£23bn), according to MarketsandMarkets – and the enormous, disruptive potential of this technology becomes clear. It is understandable, then, that aerial overview surveillance should have the widest appeal among security applications, with 61% of respondents expressing an interest.

Tracking drones are hundreds of times cheaper to hire or run than a helicopter, not to mention infinitely more nimble and discrete in tracking suspects. Both short- and long-range tracking were popular functions among survey respondents, with 39% and 35% respectively keen.

Security guard tour applications are the second most sought after application, with just shy of one in two (49%) of those polled expressing an interest.

Licence plate identification was of interest to more than one in four respondents (27%). Security guard tours are capable of patrolling more rapidly and extensively than human guards, as well as being unimpeded by physical barriers on the ground, drones are an intriguing option for the 46% of respondents who have manned patrols. Of that segment, 64% said they would consider using security guard tour applications. Perhaps unexpectedly, one in two (50%) who don’t deploy manned patrols also expressed an interest in the same functionality – suggesting that drones make unmanned patrols a viable, desirable tool for organisations that eschew or cannot afford manned patrols.

Where sensors detect an intrusion at the perimeter, a security drone can be dispatched much faster than a person on foot. And once at a scene – perhaps deploying a thermal camera – they can more readily spot, track and report the movements of an intruder than a flashlight-wielding security guard. This also removes humans from harm’s way. Offering rapid situational awareness, drones can therefore be an invaluable aid to first responders in emergency situations involving casualties. Drones don’t get distracted and need neither sleep nor food. That said, they still need refuelling in a way that is much more limiting than a human guard’s need for food and water.

The capacity of security drones to support and reduce numbers of fixed cameras and ‘boots on the ground’ is constrained more than any other factor by battery life – and drones are currently deficient in this regard. At present, commercial drones can typically fly continuously for only about 25 minutes. Surveillance monitoring is a 24-7 undertaking so it’s a major drawback – albeit one obviously solved by rotating multiple drones in shifts. Requiring a larger fleet, however, this obviously increases costs.